A Story Behind the Stone: Alfred Voorhees
By: Davis Duffey, Park Guide 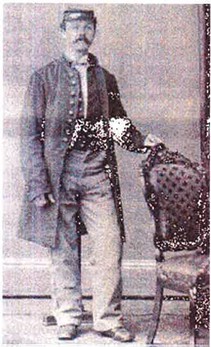 Alfred Voorhees posed for a photo as many soldiers did, likely on his first payday, next to a chair looking dapper in his uniform.

Using diaries, oral histories, and other historical evidence we highlight the life of a soldier interred at Andersonville.

Alfred Voorhees was born in New Jersey and worked as a baker prior to his enlistment with Company H of the 1st New York Cavalry on August 5, 1861, at the age of 22. After three years of service, he re-enlisted on January 1, 1864.On May 13, 1864, Voorhees was captured before the Battle of New Market in the Shenandoah Valley. After crossing the mountains and making their way to New Market, his unit of 280 men came upon 4,000 to 5,000 Confederates who they were unable to evade. Alfred Voorhees began a diary on the day of his capture. 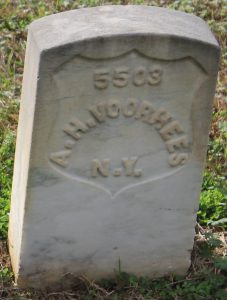 Initially, Voorhees was transferred between prison camps in Virginia. On May 15th, he was held in a church in Richmond where he was stripped of his belongings. He was moved to Lynchburg and then Danville where he was quartered in a large building and given good rations of cornbread and bacon. He arrived at Andersonville on May 25, 1864. For the remainder of his diary, he detailed the everyday difficulties such as overcrowding, inconsistency of rations, and exposure to the elements due to lack of shelter.

Voorhees’s problems with insufficient food began almost immediately when he was unable to draw rations the day after he arrived in camp. His diary entries on the lack of good rations often coincided with his feeling sick. In an entry dated June 11th, he wrote of receiving a good dinner, but two days later he receives only rice and meat. He also wrote of prisoners receiving rations of unbolted corn. At the end of his diary, Voorhees talked about the many prisoners who arrived at the prison daily who lacked proper shelter. Many men died of exposure from the Georgia sun, heat, and rain. Voorhees had his own shelter but said he and his fellow prisoners were powerless to help those without shelter. Voorhees first talked of experiencing diarrhea, the number one cause of death at Andersonville, on July 25th. On July 28th he inscribed that “he is sick again with diarrhea that is serious.” His final diary entry was August 3rd and on August 13, 1864, Alfred Voorhees succumbed to chronic diarrhea. He is buried in grave 5503.