The 2021 Wreaths Across American project at Andersonville National Cemetery met a goal of placing a holiday wreath at each headstone thanks to the efforts of corporate, private and park partners. Since 2008 when the first Wreaths Across America project began at Andersonville, this was the first time a wreath was placed at each grave. Led by the Bennett Family of Companies and the Taylor Foundation, 20,313 wreaths were placed the week before Christmas in the Cemetery. A ceremony was held at Noon on Saturday, December 18th that was attended by over 1,000 people. After the event, those attending became volunteers to place wreaths at each of the graves.

The traditional ceremony culminated by honoring the 13 service members who were the last to give their lives in August in Afghanistan. Attending the event was the family of Corporal Humberto A. Sanchez, United States Marine Corps. Corporal Sanchez was 22 and from Logansport, Indiana when he gave his life for his country. Wreaths were also presented for each of the service branches along with POW/MIAs from all wars.

The Bennett Family of Companies was the principal partner in the project raising funds and awareness for the project. Apart from the fundraising, four Bennett trucks adorned with patriotic messages traveled to Columbia Falls, Maine to pick up the wreaths and transport them to Georgia. The last leg of the trip from McDonough to Andersonville was made under police escort on Friday before the event. 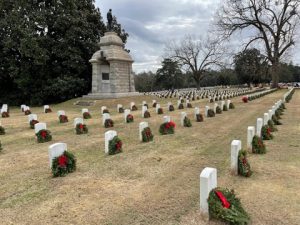 “It was remarkable to see the outpouring of support from so many dedicated organizations and individuals to honor all those buried at Andersonville National Cemetery,” stated Gia Wagoner, Superintendent of Andersonville National Historic Site, “On behalf of the National Park Service, we are sincerely grateful to everyone who made this special day possible.”

The wreaths will remain in place in the Cemetery through the holiday season. Wreaths Across America began in 1992 when the Worcester Wreath Company in Maine had a surplus of wreaths and donated them to Arlington National Cemetery. Since then the movement has grown all over the nation at over 230 locations with the three stated goals of Remember, Honor and Teach.

The event was coordinated locally by Jim Covington of the Friends of Andersonville. Covington raised funds from local businesses, organizations and individuals who expressed support for the patriotic project. He also recruited civic clubs and organizations to volunteer in the huge task of placing wreaths at each grave. Covington had told the leaders at Bennett Trucking years ago his vision to see a wreath at every grave and was recognized at the Ceremony for his persistence in working towards that goal. Another important partner in the event was the American Ex-Prisoners of War who gave one of the largest contributions to purchase wreaths.