Kids belong in parks because parks are great places to have fun and to be exposed to the American experience. One place where kids can participate in an annual tradition that combines service with an educational experience like few others. It’s the annual flag placement for Memorial Day at Andersonville. On the Saturday before the May holiday, scouts and youth groups gather to place a small American flag in the hard red clay one foot in front of each headstone. Some kids will respectfully salute the flag while others will recite the name on the gravestone. This time-honored tradition is repeated at other National and State veterans’ cemeteries across the nation. Memorial Day is the official start of summer for many Americans. However, this annual tradition provides the youth of our nation who participate with a deeper appreciation of the true meaning of the holiday. 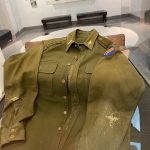 Carl Hedin’s shirt was on display at the National Prisoner of War Museum during Memorial Day. His hand sewn insignia are clearly visible on the collars.

One particular year was especially meaningful for me. As a Scoutmaster and a park employee I revisited the deeper meaning of Memorial Day through a former POW and park volunteer, Carl Hedin. After two hours of placing flags on that hot day with 200 volunteers, someone suggested that Carl could speak to the group before we provided a hot dog dinner to the kids. That seemed like a bad idea to me. I was proved wrong in that assumption. Carl kept the attention of the young volunteers as he told his personal WWII story of how his plane had been shot down and his subsequent capture by the Germans and imprisonment in Stalag Luft I. To their amazement, he told the group that the clothing he was wearing was the same uniform that he wore as a POW in prison camp. Carl provided those youth with a powerful connection to the past through his experiences. His uniform and other personal objects were donated to the National Prisoner of War Museum and were on display this past Memorial Day. The Friends of Andersonville provided support for that event (we bought the hot dogs) and have continued to support events like Memorial Day, Veterans Day and Wreaths Across America.